High earners in Poland pay 16% less in tax than the European average according to new research from UHY International, the international accountancy network*.

Poland is, however, beginning to increase its tax burden on high earners. At the start of 2019 for example, a new 4% “solidarity tribute” tax was introduced for individuals earning more than 1 million PLN. The new tax is expected to be paid by around 21,000 Polish individuals, and is due to bring in an estimated 1.15bn PLN a year**.

Poland has the 11th lowest tax burden out of the 30 countries studied according to how much tax it takes from the wages of high earners (see table below).

Out of all the countries studied, Russia had the lowest income tax rate, where all tax payers, including high earners, pay just 13% income tax.

Denmark had the highest tax burden out of all 30 countries that participated in the study (see table below).

“Poland’s tax rates on high earners are so much lower than the European average because the government is trying to use tax as a tool to combat the impact of a shrinking and ageing workforce and encourage more professionals to work in the country.”

“Overall, it’s not just individuals who look at personal taxes when deciding where to locate. Corporates also look for jurisdictions with competitive income taxes. Corporates know it may be much harder to attract senior executives to work for them if they are based in high tax jurisdictions.”

Adam Trawinski, Head of Tax & Legal Department at UHY ECA in Poland, member of UHY also explains that: “Poland is becoming an even more attractive tax jurisdiction for the young workforce, who, from August, will be exempt from income tax in Poland. According the new legislation the income tax for employees below 26 years old will be 0%.”

UHY notes that high earning Western European taxpayers are still being taxed at a higher rate than peers in BRIC and developing economies.

G7 countries including France, Canada the US and UK, have all recently taken measures to reduce or withdraw top rate tax bands imposed following the financial crisis. In 2014 for example, France’s rate of 45.8% (on a 250,000 USD income), was substantially higher than the current rate of 40.0%. In 2014, the French government also decided to scrap the country’s 75% marginal rate on incomes above €1 million.

Rick David, Chairman of UHY International, says: “Taxes on the top earners residing in G7 economies have eased off slightly since the changes imposed after the financial crisis.”

“Many Western European governments are still concerned though that their jurisdictions may become uncompetitive given the low tax rates in other developing jurisdictions so a number of countries have now taken steps to reduce their top rate of tax.”

“However as developing countries mature and their middle classes expand, governments may decide to increase their marginal rates of tax on higher earners to meet greater demand for public services. This is beginning to happen in Asian countries such as India and China which have gradually been taxing higher incomes more and lower incomes less.”

“Over time, as the population of developing countries becomes wealthier, this tax disparity between the G7 and BRIC economies could reduce.” 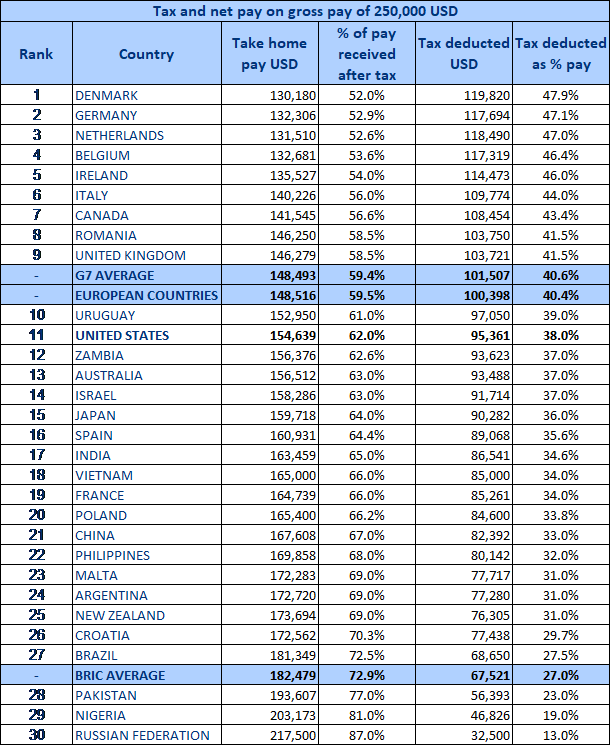 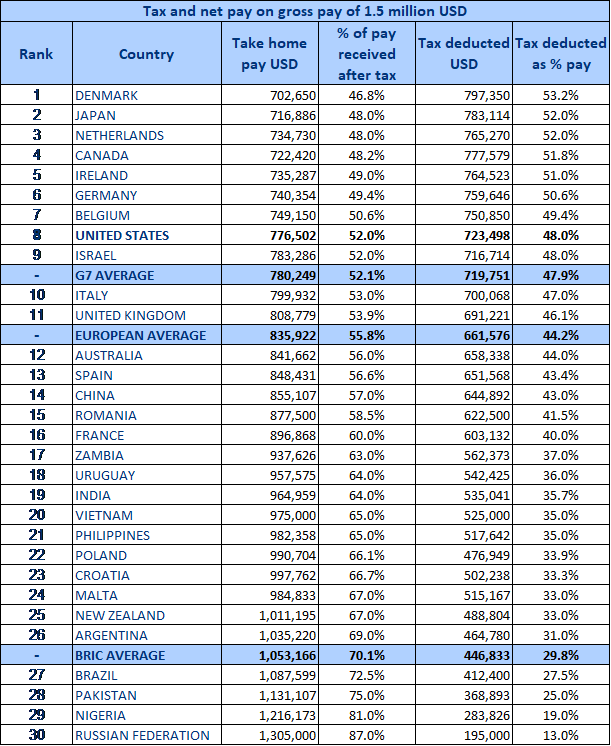 *UHY studied tax data in 30 countries across its international network. The study captured the ‘take home pay’ for low (25,000 USD), middle (250,000 USD) and high income workers (1,500,000 USD), taking into account personal taxes and social security contributions.  The calculations are based on a single, unmarried taxpayer with no children.